Hello and welcome to my Billy Joel guitar songs page where you'll find acoustic tutorial demos, free chord sheets you can download in .pdf format, some tips on strumming these songs and low cost acoustic tutorials to assist you in playing Billy Joel tunes on the guitar. 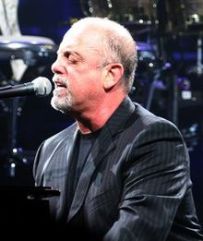 As you know, Billy Joel has been an influence in music culture since 1965. It's no coincidence that he and Elton John have become great friends through the years. Their talents are on the same instrument, they started during the same period (Sir Elton in 1962) and both are close to the same age (Joel is 71 and Elton 73 in 2020).

Have a look through the 17 songs listed below and help yourself to the free chord sheets where available. Some of these such as Piano Man, are older videos and one of those tough Billy Joel guitar songs because of the piano complexity. I have it on my list to remake and update that lesson with a free chord sheet eventually.

1. A Matter Of Trust
Chords

Billy Joel released this song in the summer of 1986 from his album "The Bridge". The song reached #10 in the US and #3 in Canada. The music video for this one featured Ringo Starr and Paul McCartney as spectators and is the only music video featuring Billy Joel playing guitar.

This song was a #1 hit in Australia and reached #17 in the US. The song has taken on a persona as a representation of the working class blue collar man. Joel began writing this song in the 1970's but never finished it until 1982. He called it Allentown not because it was an industrial steel town like Bethlehem PA and Levittown NY, but because it was easier to write lines that rhyme with Allentown. One of those Billy Joel guitar songs that has it's own special vibe to try and capture on an acoustic.

In 1983 Billy Joel released the album "In Innocent Man" from which this single can be found. This song pays respect to Ben E King and The Drifters and Joel commented he went for the high notes in this one while he still had the vocal range. The song peaked at #10 on the billboard Hot 100.

Honesty was released in May of 1979 from the "52nd Street" album which was released a year earlier. The song was a #1 hit in France and peaked at #24 in the US. Joel has performed this song with Elton John on occasion. This is one of those great Billy Joel guitar songs that everyone knows well.

5. It's Still Rock And Roll To Me
Chords

Billy Joel had a #1 hit in the US with this song during the summer of 1980. If you listen closely you'll hear that the snare drum is tuned lower than usual which was a technique requested by the sound engineer of drummer Liberty Devitto. The song was also a #1 in Canada.

6. Just The Way You Are
Chords

"The Stranger" album from 1977 is where you'll find this track. This was a career launching song for Joel as his first top 10 in the US, reaching #3, and won Grammy's for Record Of the Year and Song Of The Year. Yeah that will get you noticed for sure. The released single was about a minute shorter than the album version.

This number is from the album "An Innocent Man" and peaked at #18 on the Billboard Hot 100. Christy Brinkley, Richard Pryor and Joe Piscopo all appear in the music video.

Two member s of the group "Chicago" sang on this track from the 52nd Street album. The song peaked at #3 on Billboard in early 1979 and is one of those fun Billy Joel guitar songs to play.

9. Only The Good Die Young
Chords

Four singles were released from "The Stranger" album back in 1977, and this song was one of them. Because the song was considered anti-catholic at the time because the guy in the song was lusting after a catholic girl, many radio stations got pressure from the church. Of course the controversy drove up sales as it always does. And the guy in the song never scored with the girl in the end. The song peaked at #24 in the US.

Joel played the bar scene in the beginning of his climb and this song reflects some of the characters he'd encounter in piano lounges in Los Angeles in the early 1970's. This song was his first major hit peaking at #4 on the Easy Listening chart. During the last half of the 1970's, all of Billy Joel's singles did better in Canada than in the US.

Going all the way back to 1971 to the album "Cold Spring Harbour". Billy Joel wrote this one about his first wife Elizabeth and mentioned the song was a bit corny but he re-recorded it again in 1981 for his first live album, "Songs In The Attic".

13. Sleeping With The Television On
Chords

This song was on the 1980 "Glass Houses" album but was never released as a single.

Often times musicians don't record with the same people you see on stage. There are "studio musicians" and "live on tour stage musicians". This entire "Turnstyles" album was re-recorded after Joel was disappointed with the initial recording using studio musicians. So he used his road band in the studio to re-do the entire album and took over himself as producer. This song hails from that 1976 album.

Billy Joel said his inspiration for this song came from an encounter with Christy Brinkley, Whitey Houston and Elle McPherson and was going to call the song Uptown Girls, but then changed the title. He also said Frankie Valli and The Four Seasons gave him the idea for the vibe of the song. It was a #1 in five countries but peaked at #2 in the US. This one should be on your Billy Joel guitar songs setlist for a bar.

16. You May Be Right
Chords

This one peaked at #7 in the US and #6 in Canada and hails from the "Glass Houses" album.

Billy Joel said he was broke in 1973 while out n California and couldn't afford to buy his wife t the time a Valentines Day gift so he wrote this song for her instead. Helen Ready covered the song but Joel apparently did not really like her version.

I hope you found this Billy Joel guitar songs page helpful. Any questions, touch base.

Here is a great clip of Billy Joel and Elton John hamming it up a bit with Jay Leno.