Christmas In Dixie Chords
On The Acoustic 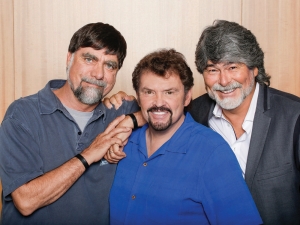 Alabama released Christmas In Dixie as a single from the RCA compilation 1982 album entitled "A Country Christmas". In 1985 the band released their own Christmas album called "Alabama Christmas". A newer updated version can be found on their 2017 album called American Christmas.

Here is the list of chords used in this song.

You can use a bit of arpeggio in this for rhythm as you'll see me doing in the demo. Otherwise you can just use a root up down up pattern all the way through. A nice easy mellow kinda song here. I'm also using a few hammer-on's as I progress through the verses.

A little bit of picking is improvised in this one as well and you can certainly change what I've done in this version. But this song works well for a single acoustic play.

All members of the group contributed to the writing of the song which celebrates Christmas in the southern United States.

Alan Caswell, an Australian writer who has written more than 1800 songs, had an axe to grind of sorts with Alabama as he thought this song was plagiarized by one of his compositions and he filed a copyright lawsuit against the group. Not sure whatever happened.

And finally, Kenny Chesney covered this song on his 2003 Christmas album and had Randy Owen record on the track with him.


By now in New York City, there's snow on the ground
And out in California, the sunshines' falling down
And maybe down in Memphis, Graceland's all in lights
And in Atlanta, Georgia, there's peace on earth tonight

Christmas in Dixie, it's snowing in the pines.
Merry Christmas from Dixie to everyone tonight.

It's windy in Chicago - The kids are out of school.
There's magic in Motown- The city's on the move.
In Jackson, Mississippi to Charlotte, Caroline.
And all across the Nation, it's a peaceful Christmas time.
Christmas in Dixie, it's snowing in the pines.