Classic Everly Brothers
On The Acoustic 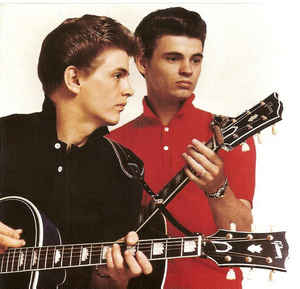 On this Classic Everly Brothers page you'll find a collection of demo covers and full lesson tutorials available for purchase along with several free chord sheets in .pdf format. Help yourself to the free chord sheets where available.

the song was written by Boudleaux Bryant and became a monster hit in many countries for The Everly Brothers when it was released in 1958. Chet Atkins played guitar on the track,

Another Everly Brothers hit written by Boudleaux Bryant and also released in 1958 reaching #1 in several countries.

This was a team effort by both Felice and Boudleaux Bryant, two American song writters, and The Everly Brothers scored another big hit from this writing duo in 1957. Paul McCartney claimed this was his first song her ever performed on a stage along with his brother Mike.

A 1960 song the two brothers wrote themselves and nailed it in the studio on the very first take. Floyd Cramer played piano. It was a #1 hit and also hit #1 for Reba on the country charts in 1989.

Roy Orbison actually wrote and recorded this song about his first wife. The Everly Brothers used this as a B-side to All I Have To Do Is Dream in 1958.

Another great song from the songwriting team of Felice and Boudleaux Bryant, The Everly Brothers released this one in 1957. The church in Boston thought the song was too suggestive and had it banned for a time according to Don Everly. It is probably one of the most well known songs by the brothers.

A member of Buddy Holly's band, Sonny Curtis, wrote this song, which was a #7 hit for the Everly's in the US and a #q in the UK. Sonny had only written one verse, but when Don and Phil heard the song, they loved it. Sonny wrote a 2nd verse as they had requested him to, but they went ahead and recorded the song by just repeating the 1st verse. When the 2nd verse arrive in the mail. it was too late.

Several artists went ahead and recorded the song with the 2nd verse, but only Anne Murray had a #1 with her cover, and only singing that one original verse.

This song was written by Dire Straits and appeared on their 1985 "Brothers In Arms" album. Phil and Don recorded their version of the song later that same year.