Here on this Conway Twitty guitar cover songs page you'll find a collection of demo covers and full lesson tutorials available for purchase along with several free chord sheets in pdf. format. Help yourself to the free chord sheets where available. 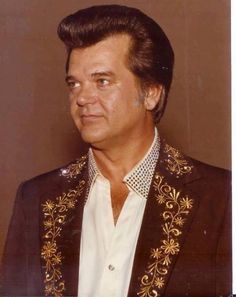 Check out these cover demos and grab the free chord sheets where available. If you'd like to purchase a tutorial lesson, that is available also for a small fee.

Between Blue Eyes And Jeans - A song Conway recorded and released in the summer of 1985 from his album "Don't Call Him A Cowboy". The song peaked at #3 on the country charts.

Boogie Grass Band - This song was a #2 hit for Conway in the US and a #1 in Canada when it hit the airwaves in the summer of 1978.

Darlin You Know I Can't Tell A Lie - Going way back to 1969 with this song, which was also the title of the album and the only single released from it. The song reached #2 in both Canada and the United States on the country charts.

Desperado Love - This song was one of two singles released from Conway's 1986 album "Fallin For You For Years". Vince Gill sang harmony on this track with Conway and helped take the song to #1 in Canada and the USA.

Don't Call Him A Cowboy - His 50th number one hit came when this song was released in Feb 1985 from the album of the same name.

Don't Cry Joni - In 1975 Conway Twitty recorded the album, "The High Priest Of Country Music". Don't Cry Joni was one of two singles from this album and the song reached #4 in the US and #2 in Canada.

Don't Take It Away - Jody Miller recorded this song 4 years earlier in 1975 and reached #67 on the charts, but Conway's magic touch in 1979 brought the song to #1 on the country charts.

Fifteen Years Ago - This song hails from the 1970 album of the same name. And yes it was another #1 for Conway Twitty.

Goodbye Time - From Conway's 1988 album "Still In Your Dreams", this song reached #7 on the charts. It would only be a few more years in country music before the Conway Twitty songs and hits stopped coming and his tragic death in 1993.

Hello Darlin - This song was a #1 hit for Conway Twitty

Conway Twitty songs are memorable for sure and he recorded 57 studio albums and 20 compilation albums and had 50 #1 hits. He also had several duets thru the years but most notably with Loretta Lynn .. who is still with us at age 87 in 2019. Conway passed away in 1993 at age 59.