Im Eighteen
Chords And Lyrics
On The Acoustic 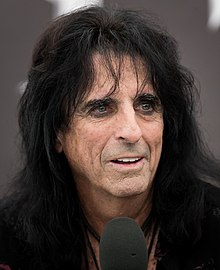 Welcome to my Im Eighteen chords and lyrics page you'll find my free pdf below, a partial acoustic demo, song lyrics, a clip of Alice Cooper, some rhythm tips and a purchase link for the full tutorial lesson.

This song can be found on the 1970 album entitled "Love It To Death" and this single reached #21 on the Billboard charts in early 1971, which was fortunate because their contract was bought out by Warner Brothers and the album re-issued, which gave it more exposure.

The song inspired Joey Ramone, John Lysdon of the Sex Pistols and a lawsuit against the group KISS in 1998 for plagiarism of their song Dreamin, which they settled out of court with Cooper.

This song was selected by The Rock & Roll Hall Of Fame as one of the top 500 songs which shared rock and roll.

Thanks for stopping by my Im Eighteen chords and lyrics page. I hope the info here was useful and if it was feel free to share it on social media.