Here on this Neil Young guitar chords page you'll find a collection of demo covers and full lesson tutorials available for purchase along with several free chord sheets in pdf. format. Help yourself to the free chord sheets where available. 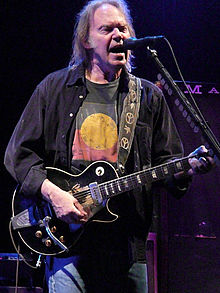 1. After The Goldrush
Chords

This song hails from the album of the same name from 1970. The song was never released as a single but was covered by Emmylou Harris, Dolly Parton and Lilnda Ronstad on their Trio album. Natalie Merchant, KD Lang and Patti Smith have also covered this song.

This song was also from the 1978 album of the same name but this one was released as a single. Apparently the original mix of this album was unsatisfactory due to a master tape being damaged during shipment, but a master copy was fine. So Neil purchased 200,000 copies of that first batch and used them a shingles on a barn roof. He-remixed the version which most have heard today.

4. Cowgirl In The Sand
None

5. Don't Let It Bring You Down
Chords

This song also hails from the 1970 "After The Goldrush" album. but the song was never released as a single but has been covered by more than a dozen artists.

This song was also from the "Harvest Moon" album released back in 1992. The peaked in Canada at #5 but never charted in the US but reached #36 in the UK. The song was a tribute to his late wife Pegi. Linda Ronstadt sang backup vocals on this track.

Make sure you grab the Neil Young guitar chords for his only #1 hit song.

Neil Young wrote this song but it was released in 1970 while he was part of Crosby Stills Nash and Young from their "Deja Vu" album. The song was never released as a single.

This can be found on the 1978 "Comes A Time" album. Young presentd the song a few years earlier to CSNY but apparently they didn't want to record it. The song was never released as a single.

12. In The Days That Used To Be
Chords

From the album "American Stars N Bars" from 1977, this song was a single but only charted in the UK at #48.

Grab the Neil Young guitar chords and visit the chords and lyrics page for more details about playing this song.

This song was a protest song written by Neil Young after seeing photos in Life Magazine of the May 1970 Kent State shootings in which four university students lost their lives. They rushed the recording and had the song on the airwaves by June of 1970. Some radio stations refused to play song and the Nixon Administration were not too happy about the recording. It was the only single from the "So Far" album and peaked at #14 in the US.

17. Out On The Weekend
Chords

This song was not a single from the 1972 "Harvest" album but is the opening track from the album. One critic said the song would have been a hit had it been released as a single.

Neil Young wrote this song when he was 19 yrs old and the song originally had 126 verses. He managed to bring it down to four eventually but even tho his first demo was in 1965 and the the first recording was back in 1968 along with "The Loner", it never appeared on an album until 1977 which was the "Decade" album. The song did not chart as a single.

Neil Young made his debut album in 1969, released four singles including this song, and non of them charted. In fact in Neil Young's long solo career, he only had one #1 song in Canada and the US and it was "Heart Of Gold".

22. The Needle And The Damage Done
Chords

23. Tonight's The Night
None

This was Neil Young's sixth studio album which was released in 1975 but mostly recorded in 1973. No singles were released from the album.

24. When You Dance I Can Love
Chords

Thanks for stopping by this Neil Young Guitar Chords page and I hope you found the info here useful and helpful.