REM Songs
On The Acoustic 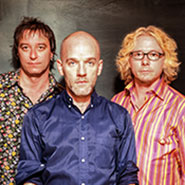 4. Talk About The Passion - (Demo Unavail)

This song by REM is off of their 1991 album "Out Of Time". The song revolves around a mandolin riff from Peter Buck who just purchased a mandolin and was trying to learn how to pay it. This became the groups biggest charting song in the US to date at #4 on the Billboard chart. This song won 2 Grammy's in 1992.