The Eagles Covers
On The Acoustic 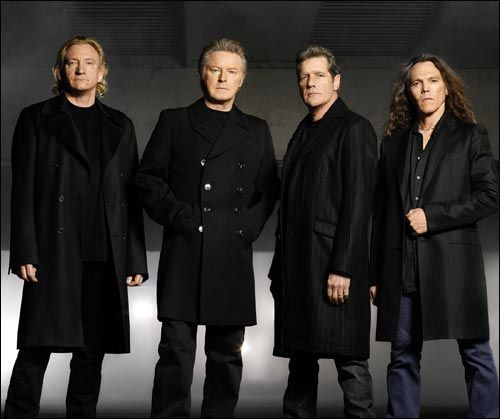 All Night Long was written by Joe Walsh and as a solo single, reached #19 in the US and #13 in Canada. It was his highest charting single. The song also appeared in the film Urban Cowboy back in 1980.

2. Best Of My Love
Chords

In 1974 The Eagles released their album "On The Border". The two official singles from the album were Already Gone and James Dean. But a DJ from Kalamazoo MI began playing Best Of My Love from the album. Eventually Glenn Frey released it as a single and it became the bands first Billboard #1 hit in Mar of 1975.

Strange as it may seem, the Desperado album of 1973 never released the song Desperado as a single. Don Henley partially wrote the song in 1968 but Glenn Frey helped him finish the song and later claimed that Desperado was the beginning of their writing partnership. In spite of no single, this is one of the most famous of The Eagles songs.

Doolin Dalton was a song created from a wild west gunfighters book about a gang of robbers by the names of Bill Doolin and Bill Dalton. It was featured on the Eagles 2nd album, Desperado from 1973.

A journey from innocence to experience is how Don Henley explained the true meaning of one of the most famous of The Eagles songs from 1977 and #1 hit, Hotel California. Don Felder wrote the melody while Frey and Henley wrote the lyrics. Hotel California was named after the Beverly Hills Hotel. The song also won them a Grammy Award in 1978. Of all The Eagles covers, this one is probably the worst to play solo because of the duelling lead guitars and high vocals in this number.

John David Souther, a.k.a. J.D. Souther, wrote How Long and released it himself in 1972 on his debut album. The Eagles, being long time friends with J.D., decided to record the song in 2007 on their "Long Road Out Of Eden" album. The song won them a Grammy Award in 2008, their first since Hotel California back in 1978.

7. I Can't Tell You Why
Chords

Timothy B Schmidt came up with the concept for I Can't Tell You Why based on personal experiences. With the help of Frey and Henley, they completed the song and was the first recording for the album "The Long Run" released in 1980. The song peaked at #8 and was their last song ever to appear on that chart.

8. It's Your World Now
Chords

From the Long Road Out Of Eden album and co-written by Glenn Frey, this is one of The Eagles covers that has a sad vibe to it considering now that Glenn has passed.

James Dean was released as a single in 1974 and was written mainly by Jackson Browne according to Don Henley about the real actor James Dean who died in a car crash in 1955 at the age of 24. The song peaked at #77.

10. Love Will Keep Us Alive
Chords

From the 1994 "Hell Freezes Over" album, Love Will Keep Us Alive features Timothy B Schmidt on lead vocals. This was the last single featuring Don Felder. The song was never officially released as a single in the US, but it did hit #1 on the Adult Contemporary chart in 1995. A high sing thanks to Timothy B Schmidt but one of The Eagles covers you should try and learn as it's a great tune.

Glenn Frey and Don Henley were having lunch when Glenn noticed an attractive girl with an older fat guy and remarked "she can't even hide those lyin eyes". And with that experience, another of The Eagles songs was born that became a #2 hit and a crossover #8 country hit when it was released in 1975. The single is shorter in length than the album version.

Bernie Leadon wrote My Man as a tribute song to his long time friend Ingram Cecil Connor III a.k.a. Gram Parsons. The two played together in a group called The Flying Burrito Brothers.

Although JD Souther was not a member of The Eagles band, several songs he's co-written with Henley and Frey, including this one New Kid In Town. It was a #1 hit when it was released as the first single off of the "Hotel California" album. The song also won a Grammy Award. This is likely the most complex of The Eagles covers I do because of the guitar work in this one.

Ol 55 is actually a Tom Waits song which he recorded and released in 1973. The Eagles recorded a version in 1974. Tom Waits didn't like their version and later on admitted he never actually like The Eagles songs at all, claiming their albums were good for keeping dust off of the turntable.

Songwriter Jack Tempchin wrote Peaceful Easy Feeling while trying to break into the music business. He met Glenn Frey who was impressed with the song as the band was recording The Eagles first album. The song became their third single and peaked at #22 in the US.

Charles Brown, a blues singer, first released Please Come Home For Christmas back in 1960. The Eagles decided to release their version in 1978 and the song peaked at #18. Bon Jovi also covered the song in 1994 and had a #7 hit. This was the first song Timothy B Schmidt played bass on for the Eagles.

Steve Young wrote and recorded Seven Bridges Road back in 1969 about a girl and seven bridges near the Cloverdale neighbourhood in Montgomery Alabama. Liam Matthews and Mike Neasmith of The Monkees had first recorded multiple harmonies on a 1973 album. They had partied a few times with Don Henley who liked what they did and he used it as one of The Eagles songs for the 1980 "Eagles Live" album. Not one of The Eagles covers that makes much sense to perform if you're a solo performer.

Jackson Browne, a close friend to Glenn Frey, starting writing Take It Easy, but never finished it. So Glenn stepped in, finished the song and the arrangement, and with Jackson' permission, recorded the song on The Eagles debut album and was the bands very first single which peaked at #12 in 1972. Travis Tritt covered the song in 1994 and his video was responsible for re-uniting The Eagles after 13 years.

19. Take To The Limit
Chords

This song hails from the "One Of These Nights" album from 1975. Randy Meisner wrote most of the song but didn't like performing it live because of the high notes that he wasn't always sure he'd hit. It was a major reason he left the group. Not many artists do The Eagles covers, but Clay Walker did on this song.

Lying on a couch and messing around with a riff, Glenn Frey came up with Tequila Sunrise, the bands first single from their 2nd album from 1973. The song peaked at #64. Alan Jackson covered the song in 1993 which also peaked at #64 on the country charts.

21. The Girl From Yesterday
Chords

Not much info on the song The Girl From Yesterday from the "Hell Freezes Over" album. It was released as a single and peaked at #58 on the country charts in 1994. A bit high for me but so are most of The Eagles covers I do here.

22. The Hollywood Waltz
None

The Hollywood Waltz was written by The Eagles and recorded for the "One Of These Nights" album from 1975. The song was never released as a single.

JD Souther wrote The Sad Cafe, one of 10 of The Eagles songs appearing on the "The Long Run" album from 1979. Another of The Eagles covers that you should know.

Don Henley credits Witchy Woman as one of the most important of The Eagles songs as it was the first song he'd written for the group. Bernie Leadon dropped by one day and began playing a riff he'd been messing with so he and Henley laid it down on a cassette. Various characters influenced Don Henley in the writing of the lyrics. The song was the 2nd single from the 1st album and peaked at #9.

Thanks for stopping by The Eagles Covers page here on my site and I hope you found some useful information.