The Mavericks Songs
On The Acoustic 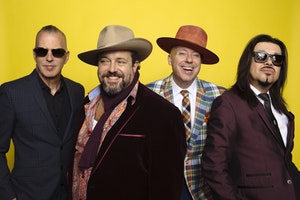 Here on The Mavericks songs page you'll find a collection of demo covers and full lesson tutorials available for purchase along with several free chord sheets in pdf. format. Help yourself to the free chord sheets where available.

Five Of The Mavericks Songs - Tutorials

I must say that The Mavericks certainly have their own sound with a mix of Latin and Rockabilly music. They formed in the early 1990's and hung in there until the first break up in 2000. They re-grouped again and broke up once more in 2004. In 2012 they came back once more and have been together til this present day in 2019.

They formed in Miami Florida in 1991 as a punk group and frequently opened for Marilyn Manson. Over time they began leaning away from that genre and into country. The band picked up a Grammy in 1995 for the song "Here Comes The Rain".

Thanks for stopping by The Mavericks songs page. More lessons will be added here over time.