Toby Keith Covers
On The Acoustic

Looking for Toby Keith covers you can easily learn on the acoustic guitar? You'll find a collection of demo covers and full lesson tutorials available for purchase along with several free chord sheets in pdf format. Help yourself to the free chord sheets where available. 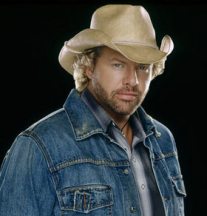 Below you'll find some of the best Toby Keith songs to learn on the acoustic guitar. These are not all of the Toby Keith top songs, but a pretty good start if you're into Toby Keith music.

This song was one of Toby Keith's longest running #1 hits when it was released in the Spring of 2005. He co-wrote this with Scotty Emerick. The song hails from the Honky Tonk University album. If you perform Toby Keith covers, thus one needs to be on your list.

2. Beer For My Horses
Chords

Another collaboration by Toby Keith and Scotty Emerick for the 2003 album "Unleashed". Willie Nelson sang duet on this album and when the song hit #1, it was Willie's first since 1989 nd made him the oldest man in country at age 70 to have a #1 song. The music video for this track also won Video Of The Year in the country category.

This song peaked at #15 in the US and #10 in Canada when it was released from the 1995 album "Boomtown". Toby Keith wrote this one and it was his first single up to that point to miss the top 10 in the US.

Another #15 single for Toby Keith in 2006 from the album "White Trash With Money". This song was also featured in the movie "Broken Bridges" with Toby Keith and Burt Reynolds.

5. Crying For Me
Chords

This was a tribute song for Wayman Tisdale who was an NBA basketball player and jazz bass musician who died in 2009. This song was the only single from the "American Ride" album and peaked at #6 on the country charts.


While sharing a golf cart with Clint Eastwood who was 88 at the time, Keith asked him where he gets his energy. Eastwood replied, "I just get up every morning and don't let the old man in". And that hook inspired Keith to write this song, which Eastwood included at the end of the movie "The Mule". Keith was actually sick when he recorded it and was going to re-do it but Eastwood took it as is.

Dreamin Walkin was a 1998 #5 hit for Toby Keith and hails from the album of the same name. The song reached #3 in Canada and was co-written with Chuck Cannon.

This song is a dedication of sorts to Toby Keith's grandmother who owned a nightclub and young Toby would work til late and hang with the bands that played there. The song hails from the album of the same name which was released in 2005. The song peaked at #8 in the US and #6 in Canada.

This song was a #1 in 1999 after the initial single, "When Love Fades" didn't do so well on the charts and was pulled. A music video went out with this release as well. He co-wrote this with Chuck Cannon and left the Mercury label and joined Dreamworks for this album release.

Another collaboration with Scotty Emerick that made it to #1 in 2003 from the "Shock N Ya'll" album. Toby Keith I Love This Bar & Grill Restaurants were born because of this song. But virtually all of the locations have since been closed due to various violations and back rent not being paid, 19 in all as of Jan 2019.

11. I Need To Hear A Country Song
Chords

There isn't any info available for this song one of those easy Toby Keith covers to learn on the acoustic.

Chuck Cannon wrote this song back in 2007 and Toby Keith recorded it but to my knowledge it was never released as a single.

This song was played in front of Willie Nelson by Toby Keith and Scott Emerick. One of those funny Toby Keith songs to give you a chuckle.

From the "White Trash With Money" of 2006, this song peaked at #2 on the charts. Dean Dillion and Scotty Emerick helped Toby Keith in the writing of this number.

Toby Keith co-wrote this song with Ron Reynolds for his "Christmas To Christmas" album from 1995. The song was never released as a single.

16. Should Have Been A Cowboy
None

In the summer of 1993 country music fans heard a new voice on radio. And it was this song that started the upward journey to stardom for Toby Keith reaching #1 from his debut album "Toby Keith". This song was the most played song on country radio in the 1990's and was written by Toby Keith himself.

17. You Ain't Leaving Thank God Are Ya
Chords

This one hails from the Honkytonk U album of 2005.

18. You Ain't Much Fun Since I Quit Drinking
Chords

This is one of those funny Toby Keith covers that will get a few laughs at a party.

Thanks for stopping by this Toby Keith covers page. I hope you found what you were looking for.